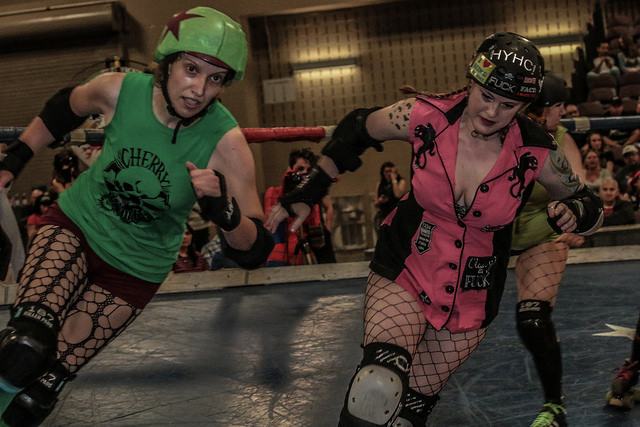 The Cats are here claws out!

The reigning champs are back, and they are ready to DESTROY!

It’s time for a rematch! Last season, the Hellcats and Cherry Bombs faced off in an epic brawl for the championship. The Bombs walked away with the Calvello Cup, but not without a solid fight from their feline adversaries, and now, the two teams return for a clash of pink and green!

Both the Bombs and Kitties have been crushing it this season. The Cherry Bombs have lost no momentum since last season’s champs, and have won bouts by some of the largest margins in TXRD history. The Hellcats, meanwhile, are fresh off a win against the Holy Rollers, and ready to bring that same cat-fighting spirit into this next bout.

The Hellcats are coming onto the track with the talents of established and fearsome skaters like Roxxi Revolver (back to strike fear into the hearts of her foes after a long hiatus due to injury), Hannthrax, Sexy Sadie, and Heathen, as well as quite a few fresh faced Gun$, including rising stars Trouble and Huff Daddy!

Meanwhile, the Bombs have bid farewell to Sacralicious, who has skated into the sunset of retirement, but have welcomed the ferocious Train Wreck Trina back to the track. NucLeah will also be making her debut as a brand-new Bomb after shedding her Holy-Roller plaid. They’ve also picked up fan favorite Ghettostar Balactica, triple threat Geminihilist, and blocker Macho Mandy Savage as Gun$ to round out their already impressive roster.

Will the Bombs destroy their way to another victory, or will the Cats claw out their revenge?
This bout is going to be chaos and claws, and you don’t want to miss it!

Get in on the action at the Palmer Event Center on July 22. Tickets are available for $20 at universe.com/txrd, with an extra $5 off with a promo code from your favorite skater. As always, kids 12 and under get in free! Doors open at 6, whistle blows at 7, so get a good seat and gear up for an monumental showdown!