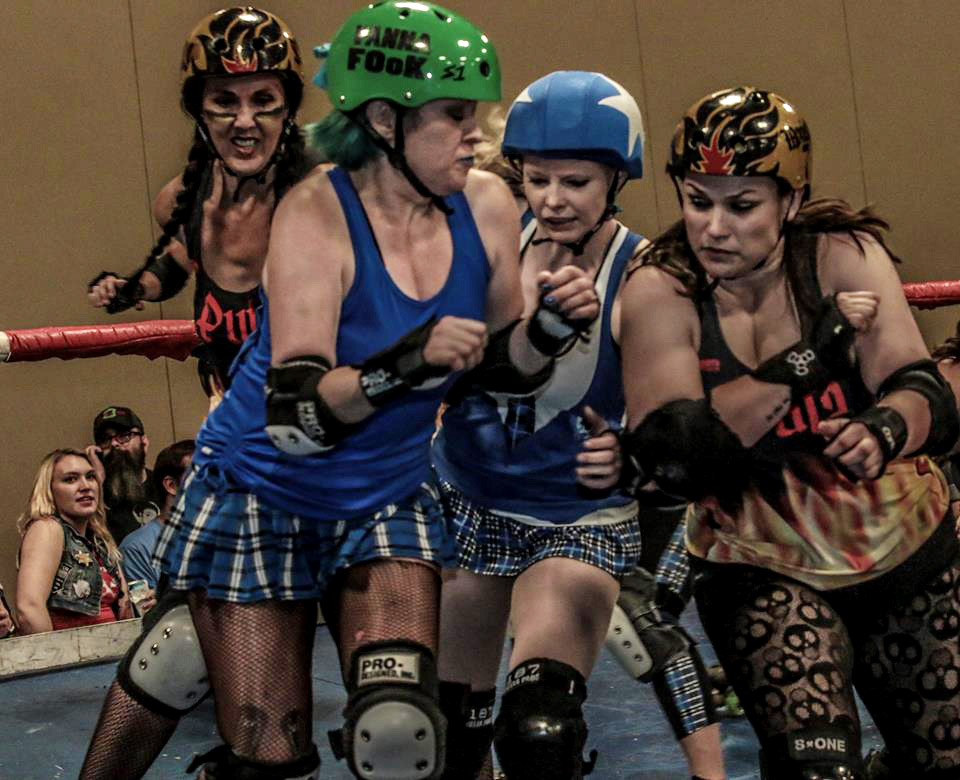 Didn’t make it out to the last bout between Heaven and Hell?

The first quarter began with an early lead from Las Putas, still glowing from last season’s Calvello Cup win, courtesy of superstar jammer Lyka Boss and brawny triple-threat Sab A. Taj, putting a combined 9 points on the board in the first four jams. In response, rock-solid Roller defensive threats Atilla the Nun, Ghettostar Balactica and Boi Division switched gears and held Boss at bay for several subsequent jams. Yet the Putas defense was equally as tough. Hard hits from the Puta blockers Pea Khante and Cora Zone combated the Roller jammers making it difficult to score. Halfway through the quarter, Dyers Eve, jamming for the first time since her rookie debut, came out crushing it, using the skills that make her a terrifying blocker to blast through the Putas’ walls like a hot nun through butter and score 7 points! The first quarter ended 19 to 14 in favor of the Rollers.

The second quarter found the Putas going big, with the intimidating defense of Pea Khante, Juicy Cooter, and Putahontas. Trapping the Rollers with sturdy walls and enabling Puta jammer Smitey Mouse to pass, they claimed lead on the majority of the jams. In addition, Sab added 16 more points. However, it wasn’t enough. The Rollers rallied behind Bible ThumpHer, Hermione Danger and Prissy Galore, snagging a combined 28 needed points in the quarter, sustaning their lead. The whistle blew at the half with the score sitting at 47-35, Rollers over the Putas as Black Irish Texas took to the TXRD stage.

Quarter three exploded with a furious reskate between ThumpHer and Boss which when the dust settled had 6 points up on the board for the Putas. Rookie Jammer, EduSkater also shined in her debut jam, scoring 4 points for the Fuego, starting her career in flames with a bang! Rollers Elle B Bach and Ghettostar Ballactica mixed it up in the pack against Buffy Basher and Knockout turing the pack into a regular meat grinder. But it was Hermione Danger who stole the show this quarter, hamming it up for the crowd as she snagged lead jammer status time after time. Is it any wonder she was voted Fan Favorite at last year’s Rollerball? Third quarter ended 66 to 47, Rollers again on top as the battle continued.

The final quarter began, and the action ramped up to a feverish degree as both teams put everything they had into each run. The Putas fought hard committing a total of 6 majors, two of which resulted in the ejection of Knock Out. Rookie, Bidi Bidi Boom Boom under Pivot Rasta Fury, cleared a path for Puta teamates often head-to-head against Roller Rookies Hunty Badger and Mardi Brawl. Boss continued to blaze a trail of fire with another 6-point jam, Roller captain Prissy Galore and her jammers successfully piled on the points for their team, while the Holy Roller defense held Las Putas to minimal scoring in the fourth. When the time ran down, Head Ref Wright On called it for the victor…the Holy Rollers!

With this game the Roller break even their record at 1-1 and the Putas start the season with 0-1 loss.