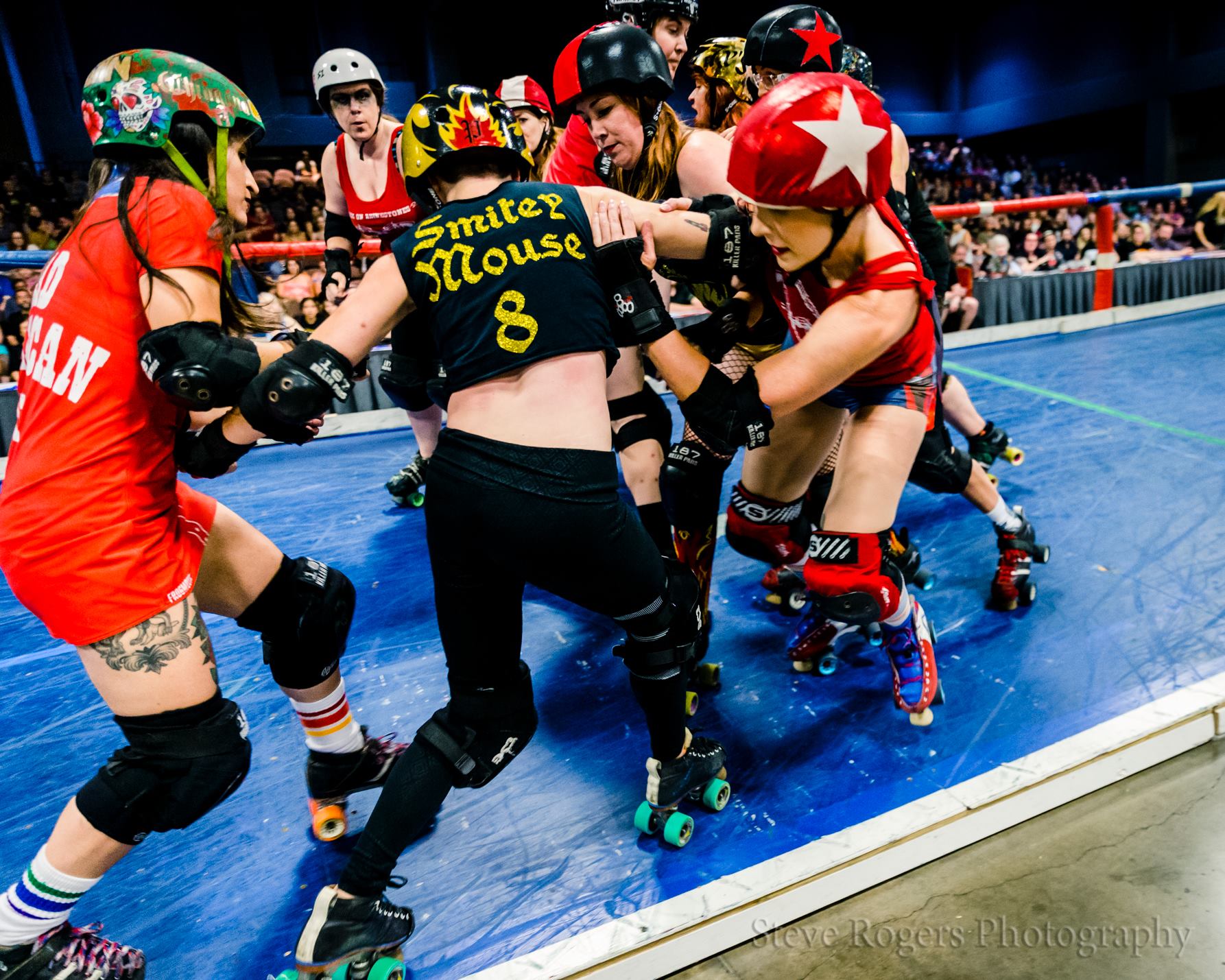 Putas put up a good fight, but the Stones remain undefeated!

The Rhinestones remain undefeated after they came out guns blazing!

If you weren’t at the Palmer Events Center a few weeks ago, you missed one hell of a battle between the rowdy ladies of the Rhinestone Cowgirls and the tough chicks of Las Putas del Fuego. In the end, the Rhinestones added one more win to their victory-studded belt and continue to be undefeated for the 2017 regular season. As a team that never backs down from any challenge, the Putas did not go out without putting up a fight through the very end.

Both teams came out in the first quarter blocking with their hardest defense, making it difficult for both teams’ best jammers to break through the pack easily. The Rhinestones steadily obtained lead jammer position throughout the entire quarter and played smart offense, calling off the jam as soon as points were scored knowing that a fiery Puta was always on their spur-studded heels. The Rhinestones stayed ahead for much of the first quarter until Lyka Boss turned up the heat with one 10 point jam, putting the Putas ahead at the end of the first with a score of 21-19.

Tensions rose along with the dust and fire of the second quarter with a close score and multiple penalties called on both teams. Jammers went toe-to-toe on points until the relentless Gnarly Carly swept in with a 10-point jam, snatching the lead back from the Putas in a quick gust of wind and curls. Returning from injury, Carly was out for blood and would not be stopping there, going on to score another 9 points later in the same quarter. Multiple re-skates for majors on both teams left jammers exhausted but refusing to surrender to massive hits and solid walls.

With the Rhinestones holding the lead at 52-33, the Putas came in with the fires of hell at their feet and a fight in their hearts to take back their initial lead. With major blockers from both teams like Dusty Doublewide and Bidi Bidi Boom Boom, jammers continued to struggle getting a quick lead status. Majors and minors alike continued to be called throughout the third quarter with even more re-skates and and a few minor penalties. The Rhinestones pulled away and left the third quarter holding lead at 94-47.

The Putas busted out in the fourth quarter ready for a brawl; with flames in her eyes, Lyka Boss took down Gnarly Carly in the first jam and was ejected from the game for her 3rd major. Newcomer Geminihilist threw her fingers up to the crowd as she followed soon after with her first TXRD ejection. The Rhinestones continued to hold their lead but couldn’t prevent players like Boom laying her hard hits on their jammers. Despite their fearless efforts, the hardest hits from the Putas weren’t enough and the star-spangled Rhinestones came out on top.