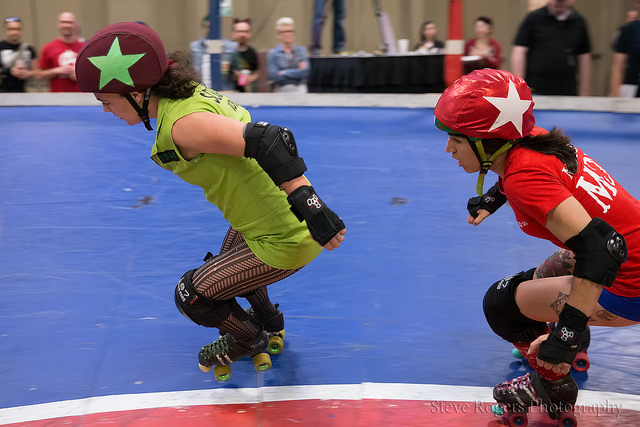 This season’s comeback kids are up against the reigning champs…

Who will come out on top?

Get ready for the nail-biter of the season, derby fans! On Saturday, August 19th, two undefeated titans step into the ring, and only one team will exit with their winning streak intact. TXRD’s 2017 season continues with the Cherry Bombs taking on the Rhinestone Cowgirls!

This season finds the Bombs looking bigger and badder than ever, with a beefed-up roster consisting of brutal blockers like Rolla Parks and Zara Problem, hybrid threat Ninja Please, and fleet-footed jammers like Joliet Jane and Rocky Casbah. Is it any wonder that they’ve managed to blast the competition to Kingdom Come to have an undefeated season, thus far?

Meanwhile, the Rhinestones have made their mark as this year’s comeback kids. After a 2016 season defined by loss after loss, the western warriors have shocked the TXRD world by trampling the competition in their first three games! With a solid blocking core of skaters like Liv R. Damage, Bikini Killer, and Dusty Doublewide, not to mention jamming phenomenon Mad Mexican, they now find themselves squaring off against their greatest adversary.

This is bound to be one of the closest games of the season, with both teams nickel-and-diming each point. But as they say, “almost” only counts in horseshoes and hand grenades, and someone will have to accept defeat when the dust settles. Who will it be?

Join us at the Palmer Events Center on August 5th to find out! Tickets can be purchased at universe.com/txrd for $20, and you can get $5 off by hitting up your favorite rollergirl for her skater code! As always, kids 12 and under get in free!