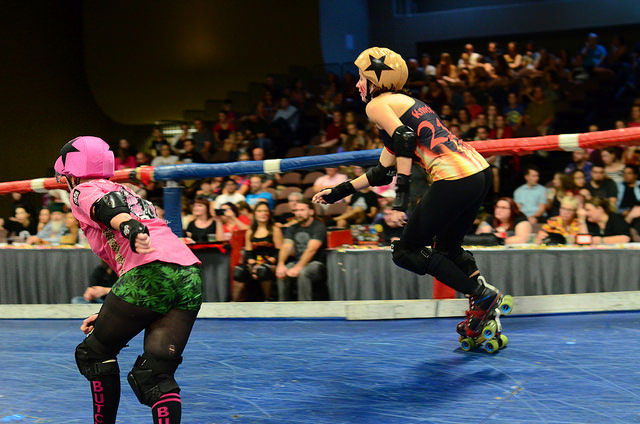 The Putas and Cats are bringing Hell to the Palmer!

The Hellcats are coming claws out against the Putas!

Get thee to the Palmer Events Center for some fire-slinging, claws-out mayhem! On Saturday, April 1st, Texas Roller Derby is serving up brutal hits, powerful women and bad attitudes as everyone’s favorite whores from the depths of Dante’s Inferno, Las Putas del Fuego, take on the lean, mean feline machines in hot pink, the Hellcats!

Although they both ultimately succumbed to the chaotic might of the Cherry Bombs last season, the Putas and Hellcats each proved to be armed with tremendous talent, as evidenced by a smattering of victories throughout 2016. After a surprise end-of-season loss to the Putas preceding the Calvello Cup, the kitties are back with rabid energy and some talented new draft picks in Brew Nitro, Emerson Biggins and Whiskey Smash. The sudden departure of vets Val Kerry and Mo-Lest-Her, and the absence of their fearless leader Roxxi Revolver (benched with an injury), has the cats facing an uphill battle. However, with a still-stacked roster including co-captain Hannthrax and blocking phenomenon Soviet Crusha, they could still easily take home the win.

Meanwhile, Las Putas are nursing a few injuries of their own, with both Sasha Fears and new Putita Randi Reckless temporarily out of commission. Despite these setbacks, the whores still enter the battlefield at a slight advantage, retaining most of their active roster, including blocker terror Pea Khante and jamming sensations like Eduskater and new captain, Smitey Mouse. That said, they’d be mistaken if they assumed they’ve got this one in the bag, because, as the saying goes, the cat’s out of the bag (sorry, couldn’t resist), and that feline is spittin’ mad!

Notably, every member of the current Hired Gun pool has been selected to skate as alternates in this game, so this is a great chance to see tomorrow’s stars make their debut! Las Putas have chosen Hammer, BeVicious, Irie One-Shove, and Daisy Confused, while the Hellcats have picked up Assault & Vinegar, Jackie Lantern, Pistol Retta, and Tomb Raver!

For tickets to this not-to-be-missed game, go online to universe.com/txrd, and be sure to hit up your favorite TXRD skater for a special promo code to knock your ticket price down from $20 to $15! As always, kids 12 and under get in free. Doors at 6, first whistle at 7, so don’t be late!