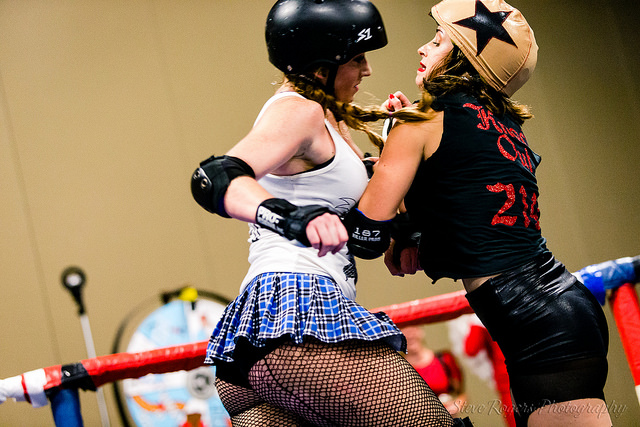 The Putas burned down the house!

The highly anticipated Holy Hell bout took place at the Thunderdome a few weeks back and showed us once again why it’s a fan favorite rivalry. Your favorite Sacred Heart bad girls, The Holy Rollers, squared off against the fiery she-devils of Las Putas Del Fuego! It was a brawl of flames and plaid, but in the end only one team would have to say their prayers.

First quarter saw some hard hits and quick jams from both teams. The Holy Rollers played a tight defense, and even though the Putas managed to burn through a few walls, the Rollers held a close lead. Hired Gun Trouble sped her way to the front of the class, putting 10 points on the board for the Holy Rollers. The Putas weren’t going to let that put their flames out, though, and closed the first quarter only four points behind with a score of 27-23.

The Holy Rollers weren’t ready to get on their knees and pray just yet, and kept up the lead through the beginning of the second quarter. Dyers Eve grabbed an easy 8 points, but the battle between heaven and hell was heating up. The Rollers maintained their lead until Smitey Mouse scored 4 points, just enough to bring the Putas into the lead by a point. The Putas tasted victory and they weren’t letting go, holding onto the lead into halftime.

The Putas returned from halftime down a skater after a bad fall took out Oh Mai, but that only fueled the fire. Penalties were called left and right as both teams fought their hardest to sway the score in their favor. The Rollers held on to their rosaries, and Putas came back with a vengeance, ending the third quarter in the lead with 77-58.

The Rollers took to the fourth quarter with some divine inspiration, holding strong against the fiery Putas. They sent out their strongest jammers, and threw up some fierce walls, but the Putas were out for blood. Hired Gun Geminihilist committed her third major, which got her ejected and sent straight to confession. The Holy Rollers managed to close the gap a bit, but in the end, the heat was too much to handle and Las Putas Del Fuego won, 92-77.