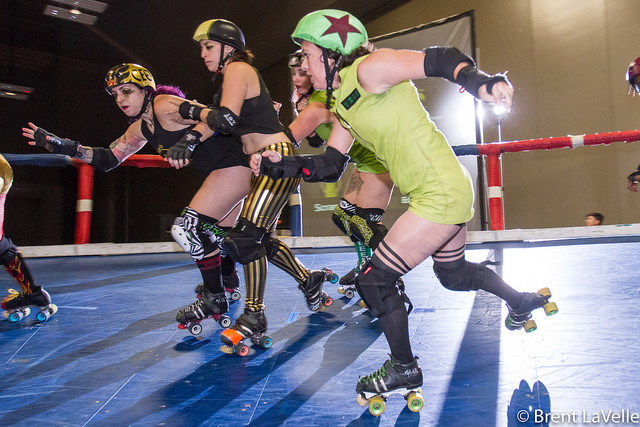 The time has come…

Be there to find out who takes home the coveted cup!

Explosions will be rocking the Austin Convention Center and the banked track will be set ablaze on November 4th when the undefeated Cherry Bombs take on the rising Putas Del Fuego for the 2017 Calvello Cup Championship! All five teams left everything they had on the track for the entire season, but there could only be two for the final showdown of the year. The Bombs are ready to hold their spot, but the Putas are out for blood, ready to knock the girls in green down from the top!

A few weeks ago, the Putas came back from a couple of hard losses and defeated the fearsome Rhinestone Cowgirls in the playoffs to clear their way to the champs. With Lyka Boss returning from injury, they finally had a full team for playoffs, and they’re ready to bring home another win in the Champs! While the Cherry Bombs are undefeated, they won’t head into battle with the assumption of a win. Milla Juke-a-Bitch will be returning from injury to land some hard, long-awaited hits on anyone in her way.

With an almost-full roster on both teams, it’s going to be one hell of a final bout! They’re sure to add some new talent with a few Hired Gun$ in the mix before the long-awaited end-of-season draft. This will be your last chance to see few iconic TXRD skaters from both teams, like Peakhante, Buffy Basher, Smitey Mouse, and Rocky Cashbah, before they hang up their skates and retire.

Grab your tickets at universe.com/txrd for $20, and get $5 off by hitting up your favorite rollergirl before the game for her skater code! As always, kids 12 and under get in free! Doors at 6pm, first jam at 7pm.