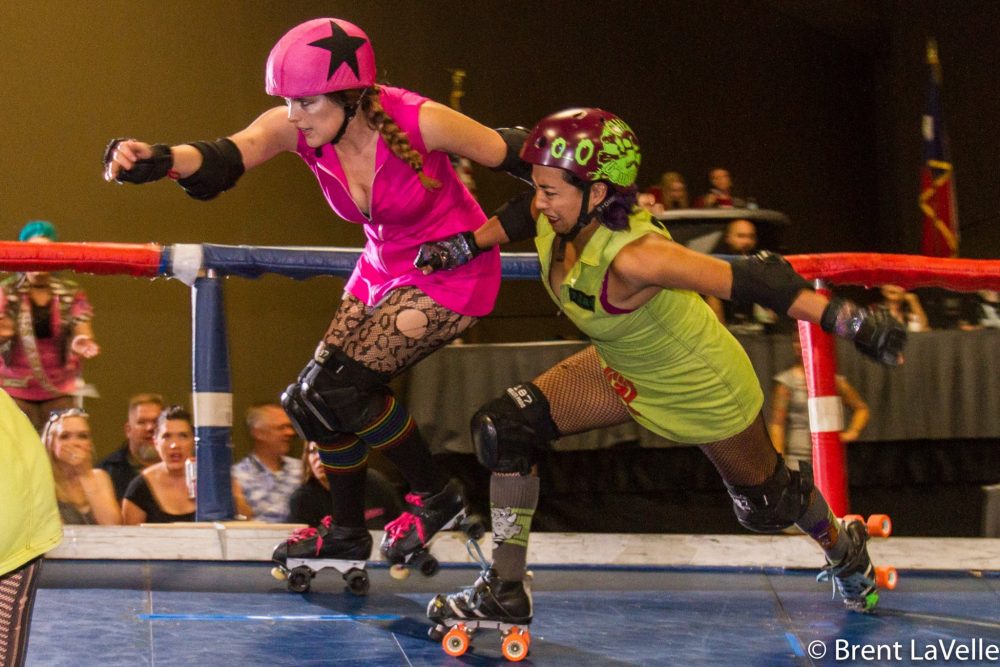 The Bombs did what they do…DESTROY!

You could hear the explosions and growls from miles away a few weeks ago when the Cherry Bombs took on the Hellcats in a game that had the crowd going wild the entire night!

Last year’s Calvello Cup rematch was one for the books, not only on the track, but off, with retired veteran skaters Cherry Chainsaw and Miss AmeriKill putting on a spectacular show as penalty mistresses. Trainwreck Trina played in her first game back this season, and the newest Cherry Bomb, NucLeah, made her big debut with the team. While the Hellcats took a loss for the night, the team went out with a roar as Hannthrax, Heathen, and Soviet Crusha played in their last game as TXRD Hellcats.

The night started out with two incredible jammers, Break N’ Bake and Joliet Jane, going head-to-head, JJ getting lead with Break right on her heels to force an early call-off with 1 point. Most of the jams in the first quarter went the same way, with one team gaining lead jammer status but the other not far behind. The quarter was not without its majors, with multiple re-skates and an epic arm-wrestle between Break and Zara Problem; you may underestimate her for her size, but Break came out with a major win! The first ended with a score of 27-10 with the Bombs in lead and the kitties ready to claw their way back.

The second quarter started with more penalties and tough walls on both sides. The Cherry Bombs’ toughest jammers struggled in the first few jams to get past walls of fur with blockers like Soviet Crusha and Roxxi Revolver holding it down until the inimitable Ninja Please stepped on the jam line. With her explosive speed and stealth, Ninja just couldn’t be stopped from continuously getting lead jammer and scoring a minimum of 5 points per jam. The Hellcats’ claws came out with scoring laps from the mighty Hannthrax and newcomer Huff Daddy, who both score points no matter what hits come at them. At the end of the second, the Bombs pulled ahead with a 64-27 score.

The Hellcats came back after halftime ready for a cat fight, starting of the quarter with several scoring jams by Whisky Smash, Sexy Sadie, and Hired Gun Trouble. Even with the kitties putting up their best jammers and hardest hits, the Bombs just couldn’t be slowed down. Rolla Parks put the fear into the cats with her enormous hits, and the rambunctious Rocky Casbah came in with her second 10-point jam of the night. Rocky went on to destroy Hired Kitten Zelda HitzGerald in a pillow fight penalty, but her win was overturned by the massive crowd of loyal Hellcat fans who showed out to support their favorite team for the night! The Bombs continued to gain even more of lead with a score of 101- 48 in the end of the 3rd.

In the last quarter of her last game as a Hellcat, Heathen went out in style, both stopping jammers in their skates and jamming herself to score a full 4 points with ease. The Bombs finished the game out with yet another win, with the final score at 123-68, making them 1 of 2 undefeated teams for the year so far. The Hellcats held their own and gave it their all through the last jam of the night, making it a memorable game for all of the kitty retirees.