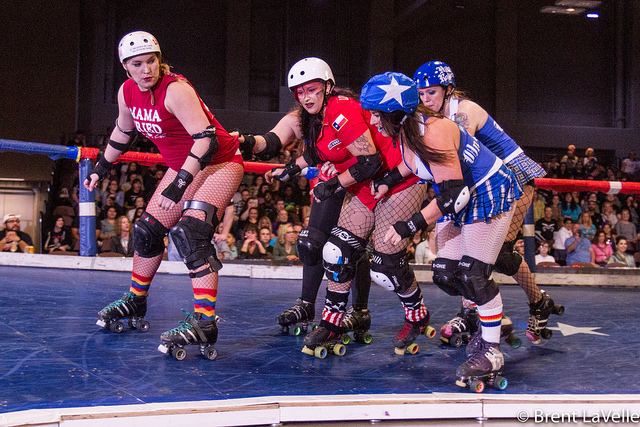 We’re saddling up for season 17!

The Rollers are out of detention and they’re headed for the Cowgirls!

After an exciting season opener pitting TXRD’s best against players from all around the country, it’s finally time for our regular home season to begin with the Rhinestone Cowgirls dusting off their boots to take on the plaid-clad Holy Rollers! The Rhinestones made it to the playoffs last season and fell just short of going to the Calvello Cup championship, but they’re back and ready to wrangle up the teams one by one. The Rollers are not be underestimated, though. These schoolyard bullies are making a comeback and ready to take everyone’s lunch money… and they’re probably handing out a few swirlys.

Both of these teams welcomed back some legendary skaters from derby past who are playing like they never left. The Rollers have brought back Anita Confess and Hispanic Panic, who are quick on their feet and hard with their hits. Known to never let an opposing jammer out of their sights, these two are sure to terrorize teams all season long. Panic and Anita both started their derby careers in the late 2000s, so their derby knowledge, expertise, and reputation as all-around badasses are going to be a huge game-changer for the Rollers in the 2018 season.

The Rollers also welcomed a new sweet baby angel, Huff Daddy, to their team at the 2017 end-of-season draft. Huff was the first pick of draft, and it was well-deserved. She’s quick on her feet, seems to never stay down from even the biggest hits, and was a crowd favorite as a Hired Gun. She’s one to look out for, if you haven’t noticed her already, and if you haven’t noticed her already, where have you been?

The Rhinestones are also packing some heat with their returning skaters, who include Nicki Ticki Time Bomb, Dill Dozer, and Sassy Squasher. Dill Dozer has been known to lay down some of the nastiest hits in TXRD and is going to be a force to be reckoned with. Sassy Squasher is a quick and sneaky jammer whose diminutive size belies her agility and power. Nicki needs no introduction, but we’ll give her one anyways. After playing for the Rhinestones for several years, she went on to play flat track with TXRG and even competed on the Texecutioners. She’s strong, fast, and super competitive; skaters from the banked and flat worlds alike are both excited to see her skate with her original team again. The Rhinestones also welcomed a new skater to their team, but a familiar face to TXRD: Nicola Virus. She’s an incredibly dynamic and aggressive blocker, and everyone is excited to see her skate with her new team.

TXRD has teamed up with Variety of Texas for this bout, we’ll be taking donations on their behalf for the night. Variety of Texas envisions a world without isolation and stigma for children with special needs and their families. Variety’s Peaceable Kingdom program helps to empower children with special needs to achieve goals without any limits. They bring together campers with shared experiences to build a community with each other while growing self-confidence. Your donation to this wonderful charity goes towards helping these children have a one-of-a kind experience at a camp built just for them.

Come out this Saturday, February 10th to see all of your favorite rollergirls in action! Grab your tickets here beforehand for $20, and get $5 off by hitting up your favorite rollergirl before the game for her skater code! As always, kids 12 and under get in free! Doors at 6pm, first jam at 7pm. This game is at the Travis County Expo Center located at 7311 Decker Ln, Austin, TX 78724 Don’t be late, you won’t want to miss a second!