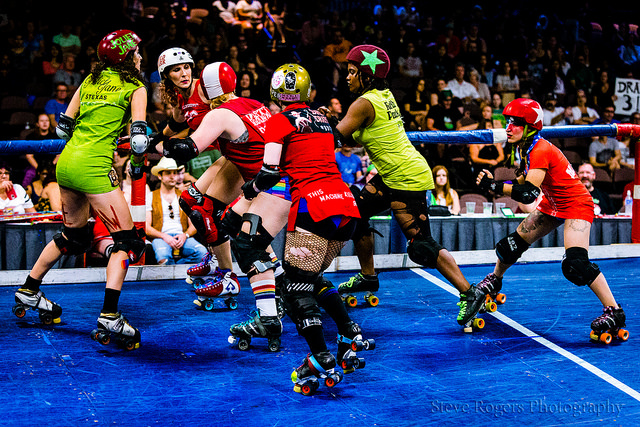 The Bombs are headed straight to the Cup!

The two undefeated teams for the 2017 season went head-to-head in the battle of the year on August 19th! Bombs were exploding and the lassos were out to wrangle up the competition. If you weren’t there, you missed the biggest hits and toughest packs that we’ve seen all year when the Rhinestone Cowgirls and the Cherry Bombs faced off in a game to be remembered. Both teams played their hardest, but the final score had the Cherry Bombs sealing their place for the 2017 Calvello Cup. The Rhinestones did not make it easy, though, challenging some of the best jammers in the league to make it through the pack–if even at all–on some jams.

The Rhinestones and Bombs alike started out strong in the beginning of the first quarter. No matter who was out first, they were calling the jam quickly to prevent any points scored by the opposing team. Both teams were playing their most powerful jammers, like Mad Maxican and Rocky Casbah, to try to get an early lead, but putting points on the board was proving to be a difficult task. The score was a one-point difference until the unstoppable Ninja Please swooped in and snatched up 8 points to pull ahead. The Rhinestones were fired up and ready to rein in some points for their team with newcomer Trouble, but every Bomb was on the lookout for her. Despite enormous efforts, the Bombs lengthened their lead when Rocky scored a hard-fought 10 points in a single jam. The first quarter ended with a score of 32-9, Bombs in the lead, but it appeared that both teams were just getting started.

The second quarter began with a minor penalty from none other than Dusty Doublewide. The brave Ieata Brains decided to take on the rowdy Rhinestone in a pillow fight, but Dusty took the win by a Spank Alley vote. The second quarter was much like the first, with jammers from both teams calling off the jam after grabbing one or two points. This quarter also brought some incredible defense from players like Dawna Destruction, who wasn’t letting anyone past her for entire jams. The Rhinestones had their own terrors on the track, though, with Liv R Damage putting any Bomb in sight on the floor. The second ended with a score of 55-21, with the Bombs in lead and the Rhinestones completely unfazed and focused for the second half.

The third quarter kicked off in a troubling first jam re-skate with 3 majors on the Rhinestones, leaving the pack 4 versus 1 and the Bombs scoring 6 points. The Rhinestones fail to waver in the face of a challenge, and steadily racked up a few points at a time to try to catch up. Powerful skaters like Bikini Killer and Domme Draper helped put up the most solid walls in the league this season to hold the Bombs back, and Gnarly Carly was consistently there to help her jammer through the pack. Regardless of strength, some walls just couldn’t maintain the impact of explosion when the Bombs detonated off the line to cause their signature chaos that allowed their jammer to slip through the smallest of holes. The third was riddled with majors and minors on both sides and wrapped up in a score of 66-39, Bombs continuing their constant lead.

The Cherry Bombs knew they couldn’t let up, because in true Rhinestone fashion, throwing in the helmet panty was not a choice. The final quarter brought on several more re-skates for majors on both sides, and the skaters were starting to feel it. Hired Gun Ghettostar Balactica brought on one of the biggest hits of the season when she stopped the ferocious Joliet Jane in her skates, and the crowd and players alike gasped in unison while Jane dusted herself off as if nothing had happened. With the help of her own blockers like Zara Problem and Trainwreck Trina, Jane went on rack up more points for her team to add on to the substantial amount she already had for the night. Big hitter Rolla Parks was ejected from the game for her third penalty, and Liv R Damage was sent home early for unnecessary roughness after a dramatic scuffle with head ref Hatchet Ma.

Unable to catch up, the Rhinestones submitted to defeat and the Bombs celebrated another victory with a score of 98-51. The ladies in stars and stripes aren’t finished, though! They’ll be back to fight for a spot in the Calvello cup when they take on the Putas del Fuego in the playoffs on September 30th!